Designed to provide attendees with an economic analysis and outlook for the coming year, the 2022 Economic Outlook Conference included global, national, and state perspectives, while focusing primarily on the trends and issues associated with the Santa Clarita Valley and the surrounding business community. Alongside the conference the SCVEDC also releases it's Outlook Book, containing more in-depth data and economic forecast information.

Hundreds of attendees listened in on updates to important topics such as demographics, employment, residential and commercial real estate trends, new developments, and quality of life. The event kicked off with a panel discussion with prominent business leaders Ana Fonseca (Logix), John Prabhu (LA North Studios), and Nate Patena (DrinkPAK, LLC), with Todd Stevens (Black Knight Energy) moderating the conversation. Following the panel was economist Dr. Mark Schniepp of California Economic Forecast, who has been keeping a close eye on the rapidly evolving economic impacts of inflation, supply chain restraints, labor force, and more on the national, state and local level. Both the panel and Dr. Schniepp spoke about the labor force in particular as a continued principal challenge. 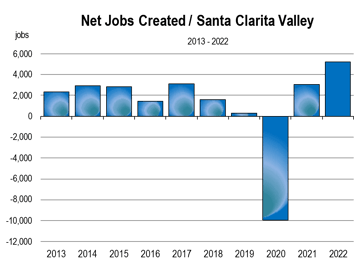 Last year our economist Dr. Mark Schniepp predicted that, absent some calamity, economic growth and the pace of recovery would remain sustainable, and labor markets would gradually return mostly to their pre-pandemic form. Wage inflation has risen substantially alongside the inflation of many key products and services, both for people switching jobs and those staying in their positions. According to Schniepp, the economy is not really in as bad of shape as things might appear, despite general inflation not being transitory and the introduction of multiple virus variants.

Dr. Schniepp stated how the labor market in

2022 is strong, but there is rising uncertainty that employment will be impacted by a potential recession that could arrive before the year’s end. Santa Clarita Valley residents, however, have returned to the workforce in 2022 and new labor force entrants in 2023 will create more opportunities for companies to fill job positions faster. In fact, we’ve had complete recovery of jobs in those local industries that were hit the hardest by the pandemic, such as hospitality, leisure, entertainment, travel, and more. Rising job counts almost always imply that (1) the demand for production is increasing and firms, therefore, need more capital, labor, or both to meet that demand, or (2) the region is attracting more businesses who employ local workers or a new in-migrating population of workers.

Dr. Schniepp predicts inflation in the US hit its peak in Q2 of 2022, and will continue to decrease to pre-pandemic levels towards the end of 2023. The SCV Labor force is now fully utilized, with job openings exceeding the unemployed. Alongside increased housing production, population growth, and job creation, overall median home selling prices will also increase in the SCV and office space will gradually fill over the next 2-3 years. Despite industrial availability sitting at zero, there are 10.8 million square feet of commercial/industries space awaiting approval. Projects like Honor Ranch and mixed-use developments in FivePoint's Valencia will create new opportunities. 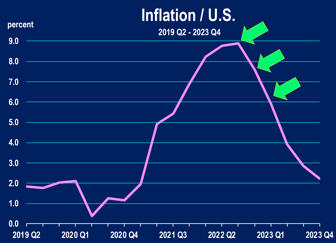 There are still many unknowns that will factor into how well our economy will progress: How will the Fed handle interest rates and inflation? Are we in a recession, or is one imminent? But while the overall growth predicted for this year has been downgraded, and stagflation is a continued concern, a bona fide recession is not likely according to Schniepp. Other than that, he sees no other indications of weakness at the local level in SCV.