The History and Evolution of Aerospace Manufacturing

The History and Evolution of Aerospace Manufacturing

When it comes to the manufacturing industry, it’s impossible to ignore the aerospace cluster which employs more than 350,000 people in California alone. In fact, for the first time in over a decade, more jobs in the industry are flowing into the United States rather than to foreign countries. We’ve come a long way from the wooden aircraft of the early 20th century flown by Orville and Wilbur Wright, however, so let’s look at how aerospace manufacturing has evolved since the first flight in 1903.

In 1914 when the Great War broke out in Europe, aircraft production skyrocketed. At the time, most planes were not only built from different materials, 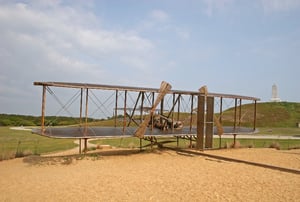 but were also one-of-a-kind. The poor wartime planning and underestimation of labor sparked the entrepreneurial spirit in America, leading to the development of a patent pool for all aircraft firms and ultimately to the uniform shape we know and recognize today by the 1920s.

By the 1930s, metal replaced wood as the main building material, but most firms focused more on the aesthetic of the aircraft rather than the production as only the United States was large enough for air travel to challenge railroads. Mass production finally developed in America in the 1940s, and the following decade saw focus move towards research, birthing both the helicopter and spacecraft.

It wasn’t until after the Cold War that the industry got a massive overhaul, shifting toward more commercial than military production, and in the late 1990s, aerospace manufacturing employment had dropped to just 7% of American scientists and engineers. More recently, however, aerospace manufacturing has seen a resurgence of growth, employing 2% of the entire workforce and 12% of manufacturing jobs overall.

California is home to 14.7% of all aerospace and defense jobs in the nation, averaging a salary of $99,722. Santa Clarita Valley alone is home to companies like Aerospace Dynamics International, ITT, and Wesco Aircraft, due in part to its proximity to military research centers. We also offer a highly qualified workforce, with 54% of residents having at least a 4-year degree, and specialized Workforce Development through College of the Canyons.

If you’re ready to take your advanced manufacturing and technology business to the next level and join some of the top companies in the industry, we’ve compiled the top resources for growing here in California. Learn more about:

Download your FREE copy of Strategic Methods to Accelerate Your Manufacturing Business in California TODAY!