Santa Clarita Valley-based Crissair was recognized today by Lockheed Martin as one of their elite suppliers for the F-35 jet. This prestigious honor is given to fewer than 1% of suppliers.

Jack O’Banion, Vice President of Strategy and CustomerRequirements for Advanced Development Programs at Lockheed Martin described the significant contributions that Crissair made to the F-35. Crissair is a critical supplier, providing 35 different components to the plane. O’Banion also recognized that Crissair is also an important engineering parter. He described the re-engineering of the grab hook that allows planes to land on aircraft carriers. To reduce the chance of the F-35 being detected, the hook is stored within the plane, requiring new hydraulic equipment that Crissair helped redesign. These innovations have enabled the F-35 to be used by all branches of the military. 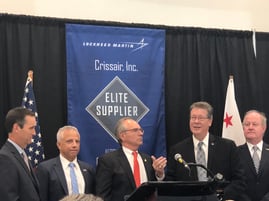 “We are grateful for the hard work and dedication of the Crissair team to the development of the F-35 Lightning II and honored to demonstrate the capabilities of the F-35 to Congressman Knight and the community here in Valencia,” O’Banion said.

Mike Alfred, President of Crissair, accepted the recognition along with other members of the leadership team.

five years earlier than previously planned. “I am thrilled to be here today to recognize the contributions of the Crissair team to the development of the world’s most advanced fighter,” said Knight. “The fifth-generation capabilities of the F-35 are essential to our ability to combat 21st century threats. I take great pride in having the opportunity to recognize the workers in the 25th Congressional District who are an important part of making it a reality for our Armed Forces and our allies.”

The event also showcased the F-35 Flight Simulator, in which participants can “pilot” the plan using the controls that are in the actual plane.

Crissair is a member of the Santa Clarita Valley's strong and growing Aerospace and Defense Coalition (ADC). The ADC is made up of over 80 SCV aerospace and defense companies that meet quarterly in the SCV. To support the ADC, the SCVEDC pursues the following services:

READ ON to learn more about more thriving advanced manufacturing companies in the Santa Clarita Valley.