Filming is Back in SCV

Filming is Back in the Santa Clarita Valley 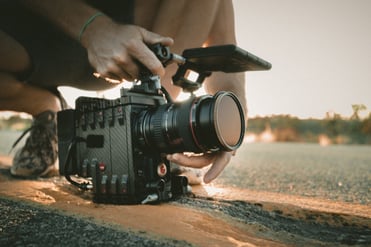 Hollywood North has become a common moniker of the Santa Clarita Valley in reference to the large amount of filming that takes place here. And it’s true – there are many TV shows, feature films, music videos and commercials shot in our region. After an industry-wide shutdown affecting film and television productions and thousands of workers due to the COVID-19 pandemic, filming is finally back, and SCV sound stages are filling up quickly.

The Santa Clarita Valley has been popular with those in the industry since there was an industry. Our varied and beautiful terrain, proximity to Los Angeles, location at the edge of the 30 Mile Zone, and our numerous movie ranches and sound stages make it an ideal location for filming. In recent years, the City of Santa Clarita’s film-friendly attitude and Film Incentive Program, and the California Film and Television Tax Credit Program have brought many productions that had been lured out of state back “home.” Now the SCV is hotter than ever because productions are seeking locations closer to home due to pandemic-related travel restrictions.

There is no doubt that SCV is a happening location for filming, and with space at sound stages at a premium, our region has added several more over the past year to accommodate the demand including the expansion of Santa Clarita Studios and the addition of LA North Studios in Valencia Industrial Center. These new soundstages bring the region’s total number close to 40. Studio interest remains high in the Santa Clarita Valley in state-of-the-art industrial developments like The Center at Needham Ranch.

In recent years, the Santa Clarita Valley has also become home to a growing number of companies that work in the background to support the film industry. Illumination Dynamics, a leader in providing lighting, grip and power distribution services to the live entertainment industry, relocated from Sylmar to The Center at Needham Ranch. Triscenic Productions which provides transportation and storage solutions for movie studios has expanded multiple times in SCV. Elite Media Technologies, a post-production company that partners with Nexflix and others, relocated to the Santa Clarita Valley from Burbank, and Richard Photo Lab, a company that specializes in film and video processing and printing expanded to a new, larger facility last year.

We expect this trend to continue – the Santa Clarita Valley remains one of the most filmed locations in California and the public’s demand for content will continue to drive expansion in the industry. SCV is a great location for all businesses, including show business, due to our educated and talented workforce, pro-business environment, commitment to remaining the most business-friendly region in LA County, and our convenient location as the gateway to Los Angeles. We look forward to more growth in the years to come.