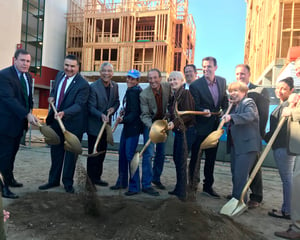 President of Laemmle Theaters, Greg Laemmle was on hand, along with his wife Tish to accept certificates of recognition from community leaders including the Santa Clarita City Council, Assemblyman Dante Acosta and Senator Scott Wilk. Representatives from Congressman Steve Knight and Supervisor Kathryn Barger were also in attendance to award certificates.

Much progress has already been made on the other parts of the development, including the completion of the five story 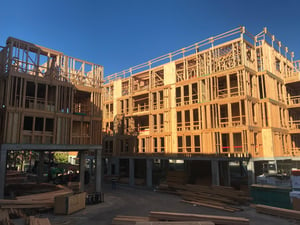 (much needed) parking structure owned by the City of Santa Clarita. The mixed-use building next door is rising quickly, and retail and restaurant leases are already being signed in the hotly anticipated courtyard-style space on the bottom floor.

Many of the speakers expressed their gratitude to the Laemmle organization for choosing Santa Clarita as their next location. “We can’t wait for Laemmle Newhall 7 to open,” said Mayor Laurene Weste. “And it’s within walking distance of my house!” she added.

Senator Scott Wilk joked, “Though our existing local theaters do a great job of showing ‘man movies’ (Spiderman, Aquaman, Batman), it will be nice to not have to drive so far to see something a little more sophisticated.”