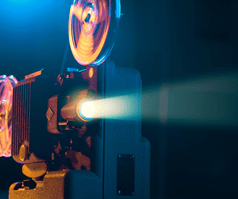 When people think filming television and movies, of course Hollywood and Los Angeles are the first to come to mind. Santa Clarita Valley however is one of the most filmed locations in the State, and that includes LA. Santa Clarita is consistently one of the most filmed places in California because it’s located within the industry’s well-known 30-Mile Zone and offers thousands of film-friendly locations that can double for almost anywhere in the world. Throw in a  City Film Incentive Program, Movie Ranch Overlay Zone, low-cost permit fees and expedited permit processing, and it's easy to see how we recently broke our own record this year by generating over $40 million in economic impact!

California has long been known as the entertainment capital of the world, and one of the ways the state has been working to keep filming here is through the Film & Television Tax Credit Program. The program has been shown to generate $24 in economic activity for every $1 invested – spurring tens of billions of dollars in economic output, helping create over 110,000 jobs, and bringing shows and films to California. In July of last year, Governor Gavin Newsom expanded The legislation expands the current film credit program with a $180 million increase over two years and an additional one-time $150 million incentive to be used over multiple years for the construction of certified motion picture soundstages – building out studio infrastructure to keep pace with the growth in production.

Having just passed the State Senate, and openly supported by Governor Newsom, a new bill (SB485) would extend the tax credit programs funding by 5 more years through 2030. Continued support and investment in our historic movie and television industry statewide will help keep productions in California overall, and keep those camera's rolling right here in the SCV! We are home to a thriving digital media & entertainment industry that supports filming at various stages of the process. Notable most recently has been the rapid growth of certified soundstages in our area, by companies like Santa Clarita Studios and LA North Studios.

SC Studios has over 1 million square feet spread across more than 35 soundstages, with additional expansion expected this year. The ever busy LA North Studios recently expanded again back in February, picking up their 5th building in the valley up in the Valencia Commerce Center.  Santa Clarita now has over 40 sound stages, over ten movie ranches, a one-stop shop Film Office and some of the lowest film permitting fees in the Los Angeles area. Heck, we have more sound stage space than the entire country of Australia, and still growing!

With the extended support of the Film & TV Tax Credit, among other factors, is it safe to say we will continue to see the same kind of growth in the SCV's digital media and entertainment industry?

We think so, but don't just take our word for it! Come get the inside scoop from Partner and co-founder of LA North Studios, John Prabhu! At the 2022 Economic Outlook on September 9th, you'll hear John's take on the film and entertainment industry in the SCV, its economic impact, current and future trends, and more!

For more information or to register, visit: www.scvedc.org/outlook