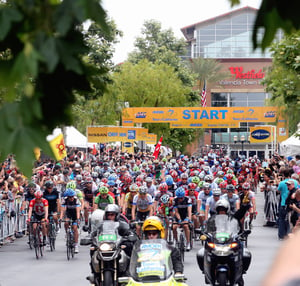 As America’s most successful cycling race, the Amgen Tour of California is one of the nation’s largest and most recognized annual sporting events. Throughout seven stages over seven days, the world’s elite cyclists will contest more than 750 miles of roadways, highways and coastlines from Sacramento to Pasadena. The Amgen Tour of California (ATOC) brings the drama and excitement of professional cycling to California for the 14th consecutive year in 2019 from May 12-18. In 2019, Santa Clarita will return as a host city, bringing the total of stages hosted in Santa Clarita to 14 – the most stages in race history!

The Amgen Tour estimates the event generates a total of $100 million in economic impact for cities that host parts of the race. The race draws world champions, Olympic medalists and Tour de France competitors from around the world — as well as an international audience watching on TV.

“Every time we’ve hosted a stage we draw large crowds that are excited to cheer on and welcome the cyclists to our city. It’s an amazing opportunity to bring a world-class event to our backyard,” said Frank Oviedo, Assistant City Manager for the City of Santa Clarita.

The Santa Clarita Valley is known for its beautiful scenery, open space, and vibrant entertainment, all within a close proximity to Los Angeles. From theme parks and historic house tours to endless outdoor recreation and celebrity sightings, you can fill your days with plenty of fantastic experiences for all ages. SCV is ideally situated near all the top Southern California events and excursions. The Santa Clarita Valley is a great location for business in part because of its high quality of life. Companies and their teams love it here.