In case you missed it, over the summer SCVEDC president and CEO Holly Schroeder was able to sit down with a few local leaders to discuss how choosing to locate in the Santa Clarita Valley set them up for success. As they both have ties to the Advanced Manufacturing industry, they shared what current trends they’re experiencing and what to expect moving forward. 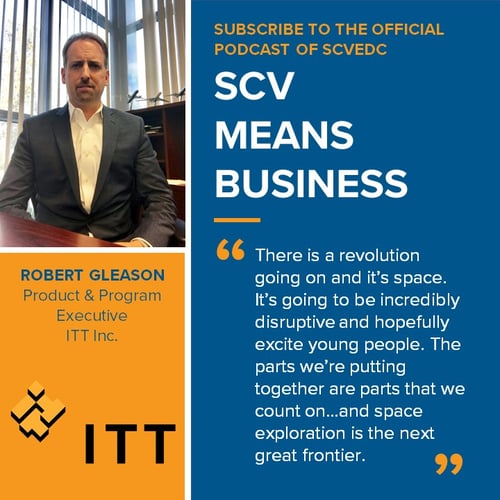 First, she met with Rob Gleason, Executive Director of Product Engineering & PMO at ITT, one of the leading global manufacturers in the aerospace and defense arena. ITT has called the SCV home for over 20 years, and their Valencia location serves as their main hub with about 550 employees. The facility houses research and development, manufacturing, testing, and design, with employees ranging from engineers to design specialists and beyond.

The ITT test lab can replicate conditions from the altitude of 50,000 feet to the extreme heat of certain land environments to ensure both internal and external structural components are safe, while the R&D team works to develop parts over a 5-10-year period that may be in use for decades. Gleason mentioned the trend to watch in A&D is additive manufacturing – also known as 3D printing – with the potential for lighter parts to provide reduced weight where appropriate in future vehicles.

He also noted a lack of available labor force as an international challenge in the A&D sector as employers struggle to compete with tech giants like Google, Amazon, and Apple, especially with a lack of space race to drive excitement. But with the likelihood for space exploration and commercialization to become a real possibility in the next few decades, they hope to drive excitement back to the industry. Gleason cited the SCVEDC as a crucial player in helping them identify potential talent and opportunities beyond what they’ve been able to generate organically. 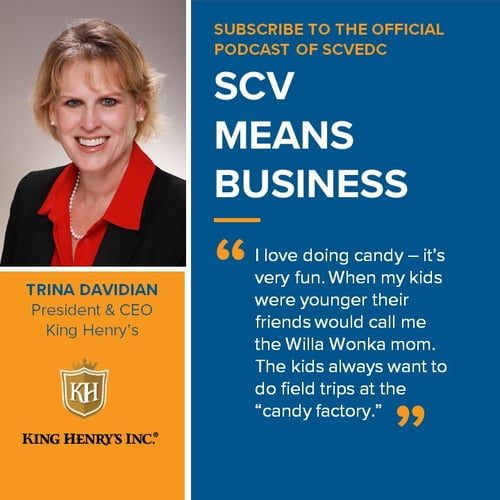 Next, Holly spoke with Trina Davidian of King Henry’s Inc, a premium snack company located here in SCV. King Henry’s is a certified woman-owned business, a distinction that the local business development center helped her obtain.

When she started King Henry’s over 30 years ago, flavors and products were simple: candy like gummy bears and rings and bags of nuts like almonds and pistachios. Today, however, Davidian shares that as people become more conscious of what they consume and tastes evolve, King Henry’s have expanded their offerings to include various flavored nuts, candies, and trail mixes far beyond the initial line.

They ended up moving from Oregon in 2005 in order to expand their potential client base into California and settled in the Santa Clarita Valley in part due to the brand-new facilities and space the area provided. As King Henry’s grew, they were able to move from packaging by hand to filling bags by machine and keep up with the demand without working around the clock in part thanks to the space they acquired.

To learn more and hear the full episodes, subscribe to the SCV Means Business podcast: