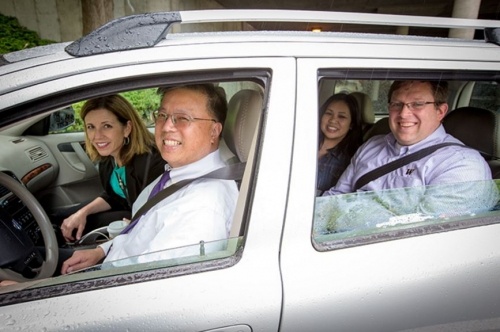 Conservative estimates suggest that upwards of 8,000 people commute from the Antelope Valley (AV) to the Santa Clarita Valley each day, whether for work or to attend College of the Canyons. However, there is no direct bus line that services these individuals to their workplace. In a recent survey conducted by the Santa Clarita Valley Economic Development Corporation (SCVEDC), 55% of these commuters are making the drive alone, which is both costly and adds to traffic congestion.

As many of these commuters are in entry level jobs, the impact of the cost of that travel is considerable. In addition, there has been a persistent shortage of workers for many entry level positions within the Santa Clarita Valley, and many AV-based individuals could consider these jobs if an affordable commuting solution was provided.

Quest Diagnostics of Valencia already utilizes a vanpool program for their employees with much success. SCVEDC has been facilitating talks among several local businesses to increase the use of vanpool programs to address the transportation needs of employees. Ken Wiseman, CEO of AMS Fulfillment in Santa Clarita feels that this program would be of benefit to employees who commute to work from the Antelope Valley. In fact, 80% of his workers who responded to a survey said they would be interested in participating in a vanpool program.

Vanpools can result in substantial benefits to participants including savings in time and money, as well as a more relaxing commute. Those who vanpool can spend their commute reading, studying or resting. Research shows that employers who institute vanpool programs increase employee retention and job satisfaction.

There are tax benefits as well. Employers may offer payroll tax savings for transportation assistance. Employers also have the option of subsidizing part of their employees’ commuting costs and allowing employees to pay for the remainder with pre-tax dollars. Commuter benefits are considered tax-free benefits, not employee wages, so a company can save on average 7.65% in payroll taxes. Employees who participate in a commuter benefit program don’t have to pay income taxes on the money they set aside for their commute, saving up to 40% on their commuting expenses. In addition to tax benefits, LA Metro is offering an incentive to reduce the cost of the vanpool rental by $400 per month.

Through the LA Metro Commuting Incentive Program, vanpools will be arranged through Rideshare by Enterprise, whose comfortable vans for commuters feature wide seats, power ports and high-definition screens for Blu-ray and DVDs. Any SCV employers with employees who commute from the Antelope Valley are encouraged to contact Rideshare by Enterprise to explore the benefits of vanpooling for your company.

As vanpool usage increases, SCVEDC intends to analyze the timing, participation, and destinations to various areas of Santa Clarita Valley. This analysis will determine whether direct bus routes can be added to serve even more people. This is one of the many business services offered by SCVEDC as we continue our efforts to make Santa Clarita a good location for business.