Millennials Are Buying Homes -- In the Burbs 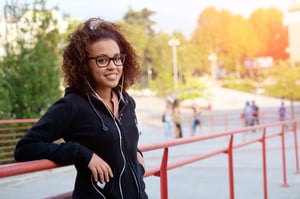 Millennials Are Buying Homes in the Burbs

While home values have reached record highs in many American cities and student debt is higher than ever, millennials in some parts of the country are choosing to buy homes anyway. But what makes a good place to live? Where are millennials choosing to live and why?

A 2019 study shows that millennials are choosing to live in the suburbs rather than cities or rural areas. As it turns out, according to Smart Asset, Santa Clarita is one of the top 25 places where millennials are settling down and purchasing their first homes. The Santa Clarita Valley was also named a "Top Suburb for Millennials" by Thrillist. And it certainly doesn't hurt that the SCV is consistently ranked as one of the happiest communities in the nation (16th this year!) by Wallethub. 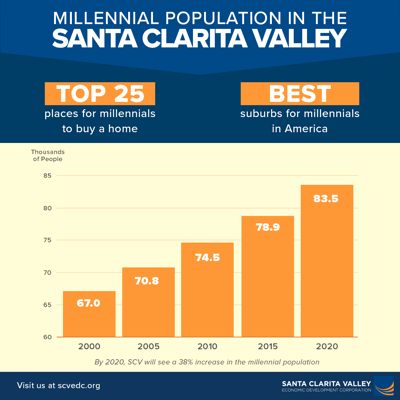 According to our 2019 Economic Outlook Report, millennials are the largest generation in the Santa Clarita Valley and the number is growing sharply. By 2020, the Santa Clarita Valley is expected to have almost 93,000 people in this cohort - an increase in 38% over a two-decade span. California's millennial population has grown more slowly, and by 2020 will have recorded a 20-year increase of just 8 percent.

Why the suburbs? The suburbs allow access to jobs in the city while maintaining a quieter lifestyle than those of city-dwellers. There are also jobs available in the suburbs themselves, and the prospect of future growth. They’re also a good place to raise a family, which is something millennials are starting to do in larger numbers.

One thing millennials value more than previous generations when buying a home is walkability. Living close to work, stores, and restaurants is invaluable; and having a place to walk or hike for its own sake is great too. Luckily the Santa Clarita Valley has those bases covered. The city has built over 20 miles of paseos designed for commuting, and recreational use, including walking, riding, jogging, and skating. The city also maintains approximately 80 miles of trails for hiking and mountain biking. Santa Clarita’s expansive bus network also keeps the whole of the SCV accessible to all.

The suburbs are also places that are driving technological advances of the future. Self-driving cars and autonomous drone deliveries are easier and cheaper to integrate into suburban areas than in cities, and far easier than in rural areas. There is room to grow in the suburbs, and opportunities to build new infrastructure from the ground up.

READ ON: Suburbia Will Drive Technology of the Future. LEARN MORE >>

The Santa Clarita Valley is a prime example of a suburb that is ready for the integration of new technologies. The city has shown it’s ready to embrace the future, promoting EV charging stations at public locations, investing in bike-share programs, incorporating smart city technology to improve traffic, and developing plans for greener, more sustainable parks and roads.

Millennials are moving to the suburbs (and so are the companies that employ them) and the Santa Clarita Valley is ready. The SCV is an ideal live, work, play community with all the benefits of being located near a big city, but none of the hassle.