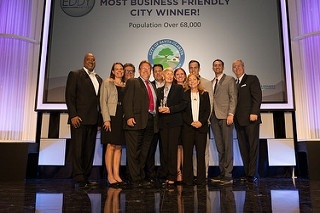 “This year’s Most Business Friendly City awardees understand that communities and families thrive when good jobs are created,” said Bill Allen, Chief Executive Officer of LAEDC. “And because business location is by choice in a globalized economy, these cities also appreciate that private sector job creation depends greatly on having business-friendly practices.”

Santa Clarita City Council Member Laurene Weste accepted the award on the city's behalf, along with other members of the City Council, and city staff. “Santa Clarita is consistently known as one of the state’s most business friendly cities," said Holly Schroeder, President & CEO of the Santa Clarita Valley Economic Development Corporation, who was also in attendance. "Leaders in Santa Clarita recognize the importance of a strong and diverse economy to protect and enhance SCV’s quality of life. As our partners in economic development, SCVEDC is thrilled that the City of Santa Clarita has been given this honor."

To find out how your company can thrive in the business-friendly Santa Clarita Valley, download a fact sheet today.