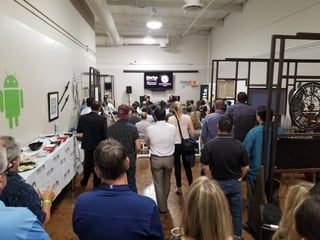 On September 12, Startup Grind powered by Google for Entreprenuers, came to Santa Clarita with an exciting event for entrepreneurs featuring Loot Crate Co-Founder, Michael Arevalo. Loot Crate, a subscription service that launched five years ago delivering a monthly box full of geek-related merchandise to consumers, is now a $116 million business that won the No. 1 slot on the 2016 Inc. 500 list of America's fastest-growing private companies.

Those who signed up for Arevalo's chat heard about, and learned from, Loot Crate's early failures and successes and Arevalo's personal journey as an entrepreneur. The event was hosted by Status Not Quo, a Santa Clarita-based web development and marketing firm. Some of what Arevalo had to say was specific to Loot Crate's industry and model, but there was much to be learned about the startup journey, regardless of the industry. Arevalo urged entrepreneurs to build experiences, create a community, and focus on the customer experience.

The energy was palpable in the packed room, where entrepreneurs listened to a fireside chat with Arevalo, and enjoyed time for community building over beer from Pocock Brewing Co. and tacos from Sharky's Woodfired Mexican Grill. A video recording of the chat will soon be available.

Get your tickets asap--the September event sold out!

Startup Grind is just one of the many local resources available to support entrepreneurs in the Santa Clarita Valley. If you are looking for the perfect location for your startup, check out SCV!