Magic Kingdom - Filming "A Wrinkle in Time" in SCV

Magic Kingdom – Filming "A Wrinkle in Time" in SCV

If you're one of the 10 million people who bought a ticket to see "A Wrinkle in Time" earlier this year, you probably gaped in awe at some of the fantastic and colorful settings.

Yes, some of them were computer generated – that's par for the course on a big-budget blockbuster these days – but some scenes were shot on location (courtesy of Santa Clarita Studios) right here in Santa Clarita Valley!

Once upon a time, not so very long ago, the likes of Oprah Winfrey, Reese Witherspoon, Mindy Kaling, and Chris Pine were on-set here in SCV along with superstar director Ava DuVernay.

All of that contributed to a three-percent increase in the economic impact the film industry has had in SCV, year-over-year. Last year was the fifth in a row that location filming contributed at least $30 million to our area's economy.

In other words, our area's film industry is booming, and considering how business-industry has had in SCV, year-over-year. Last year was the fifth in a row that location filming contributed at least $30 million to our area's economy. 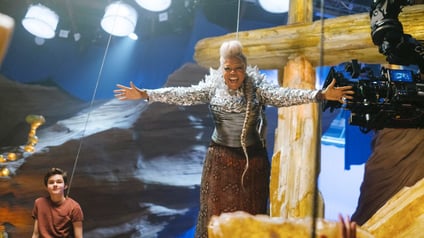 Those incentives (among other selling points) not only attracted big-name productions like "A Wrinkle in Time," but a lot of smaller productions, too. Among the TV shows that filmed in SCV last year: friendly our local and state governments are, ("A Wrinkle in Time" received $18 million in state incentives) and our proximity to Los Angeles, it's not hard to guess why.

If you missed the theatrical run of A Wrinkle in Time, be sure to pick up the DVD (or Blu-ray), available now. Look closely, and you might just spot a familiar locale in the background.

CLICK HERE> for more must-see TV and film that use the Santa Clarita Valley as a backdrop!