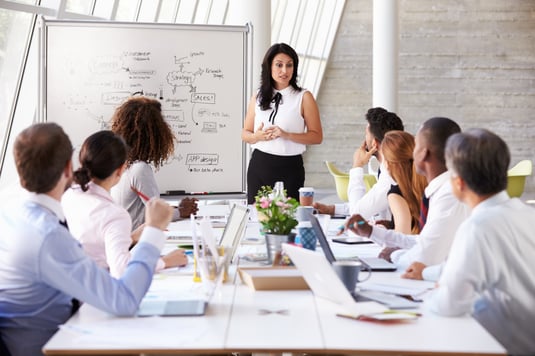 When it’s time to take your career to the next level, there’s a misconception that you’ve got to start by packing your bags.

After all, if you want to make it big in business, you’ve got to move to a big, hustle-and-bustle city like New York City or Chicago or Los Angeles, right? Or else live nearby and waste hours of your life commuting back and forth to work.

But a lot of big-name, big-payroll companies operate outside of that paradigm. Walmart is headquartered in Bentonville, Arkansas. Nike has pitched their considerable tent in Beaverton, Oregon. McDonald’s made its corporate home in Oak Brook, Illinois.

Even a number of cities flying under the radar made it on Amazon HQ2’s short list, including SCV!

These types of communities come with more affordable housing, more parking, and commutes measured in minutes, not hours.

Like Beaverton and Bentonville, Santa Clarita may not be the first name on your lips when you talk about big business, but the major players are here, and so are the quality jobs that come with them.

THIS LIST breaks down the biggest employers in our area, and they’re as varied as they are large. From media and entertainment (Vision Media Management, Princess Cruises, Six Flags), to healthcare (Henry Mayo Newhall Hospital), to technology (Advanced Bionics, Scorpion), these businesses employ thousands of people, no hour-plus commute into the city required.

There’s a lot of variety in the jobs themselves, too. Don’t let the company name fool you! Boston Scientific, for example, is looking for a Biostatistician, an HR Manager, and half a dozen engineers and project managers.

These jobs are high-paying and, if you’re coming from elsewhere in the Santa Clarita Valley, then you’re likely looking at a 20-minute commute, at most. Employees coming in from outside the Santa Clarita Valley enjoy a short reverse commute as well. That’s not just precious time saved, it’s money put back in your pocket that would otherwise be spent on gas and vehicle maintenance.

Yes, the big names are right here in Santa Clarita Valley and yes, they’ve brought the jobs with them. If you’ve got the skills to offer, then taking the next step in your career is, quite literally, closer than you think…