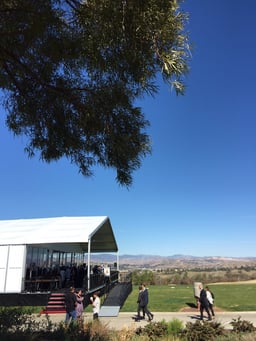 The skies were sunny and so was the economic outlook for our region at the annual Economic Outlook Forecast Conference held on Thursday, March 8.

The speaker lineup that addressed the full house included:

This year’s conference had a record number of sponsors AND attendees! Held at a new temporary event venue (called the Valencia View Room) on the grounds of the Tournament Players Club, event participants were treated not only to the latest economic data for the Santa Clarita Valley but also spectacular views of the entire valley.

Holly Schroeder opened the conference with remarks to the packed house. “This is a very exciting time in the Santa Clarita Valley. If you came to this event 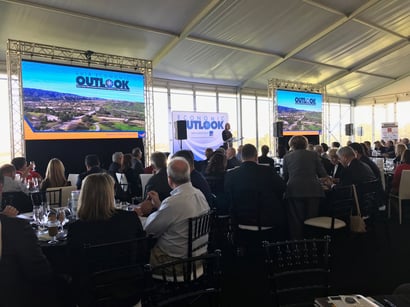 LA County Supervisor Kathryn Barger also gave a hearty welcome to the crowd and said, “There’s no doubt in my mind that Santa Clarita is a destination where people will want to come, live, and do business.”

Another interesting point Vitner made is, “High-tech job growth has slowed in the state and in the Bay Area. This is perhaps being driven by the high costs of living as tech firms move jobs to more affordable areas of both the state and the nation.” This validates the SCVEDC’s own cost-comparison research. The tech industry is growing by leaps and bounds in the SCV and other lower-cost regions.

College of the Canyons Chancellor Dr. Dianne Van Hook gave a very optimistic presentation with a focus on education and workforce development (of course), touting the success from COC’s First Year Promise students – 90% of which having achieved over a 3.0 GPA in the fall semester.

She reminded attendees of the strong partnership between the college and the business community, encouraging local companies to take advantage of the many programs the offer like:

For a fun change of pace, Scott Williams, Executive Producer of NCIS, used firsthand experience to share how the Santa Clarita Valley offers prime film locations and acts as a chameleon, masking a wide variety of cities and landscapes around the country and the globe even. He called out Old Town Newhall, Blue Cloud Ranch, and Disney’s Golden Oak Ranch as being some of his favorite SCV spots to film.

He repeatedly thanked the crowd and the City of Santa Clarita for being so welcoming to the film industry and mentioned that a large portion of his cast and crew either already lived in the Santa Clarita Valley or relocated here due to its friendly environment (and their ability to live closer to the show’s home base).

Williams also shared some heartwarming updates from Shane’s Inspiration, his non-profit organization that builds accessible playgrounds for disabled children in honor of the memory of his late son. 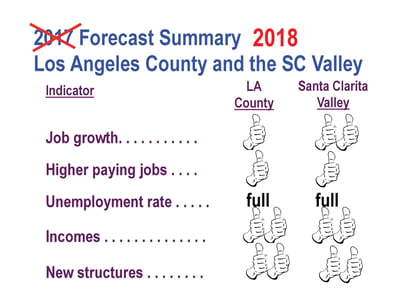 The keynote speaker Mark Schniepp gave attendees a look into the future of the regional economy. Though his talk was spiked with his trademark dry humor, he was very serious about this: in the Santa Clarita Valley the economy is strong as labor markets continue to roll, new office and industrial space is underway, more new housing is under construction, and tourism is booming. With 1,239,000 SF of industrial and commercial space underway we can expect to add over 2,200 jobs in the near future.

As the sun set on another successful event, guests mingled and networked over a glass of wine at the cocktail party hosted by Premier Sponsor Wells Fargo.