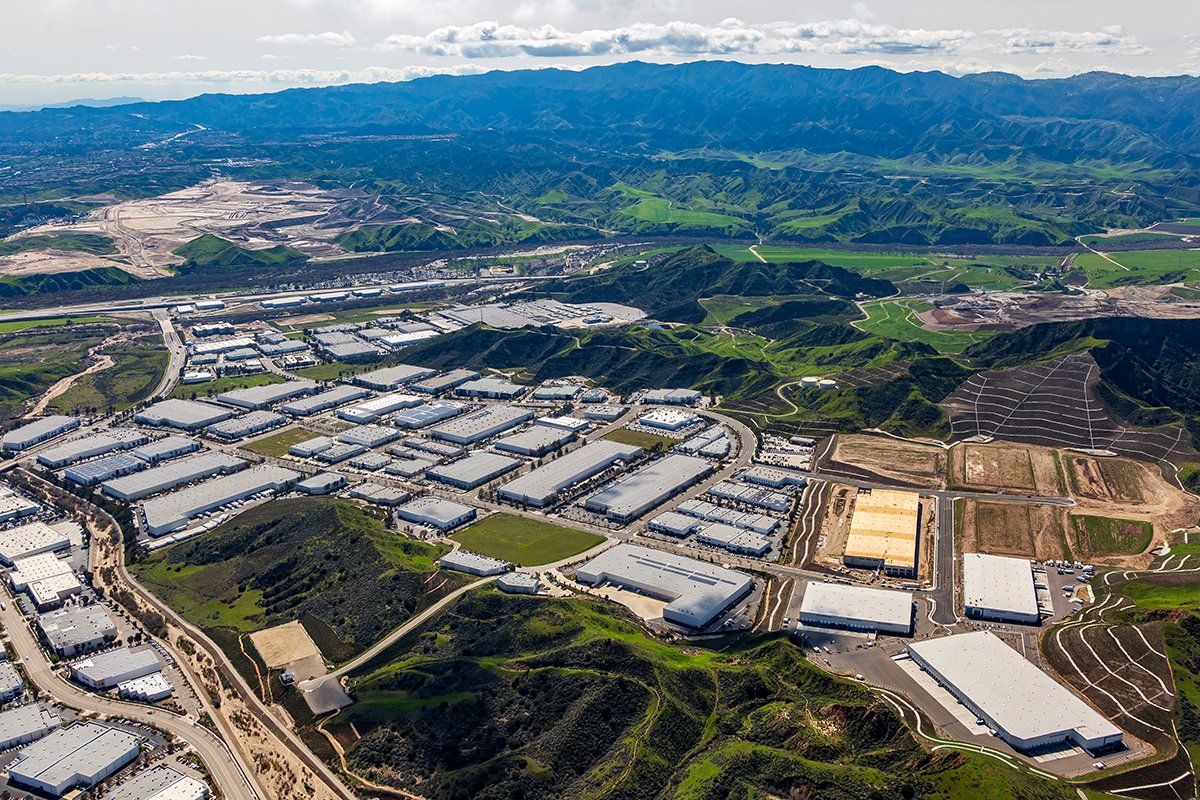 Lief Labs, a nutritional supplement manufacturing company, leased a 52,000 SF industrial building at IAC Commerce Center, adding to their 112,000 square-foot facility that houses their corporate headquarters, manufacturing, and distribution center that they leased in October of 2018. 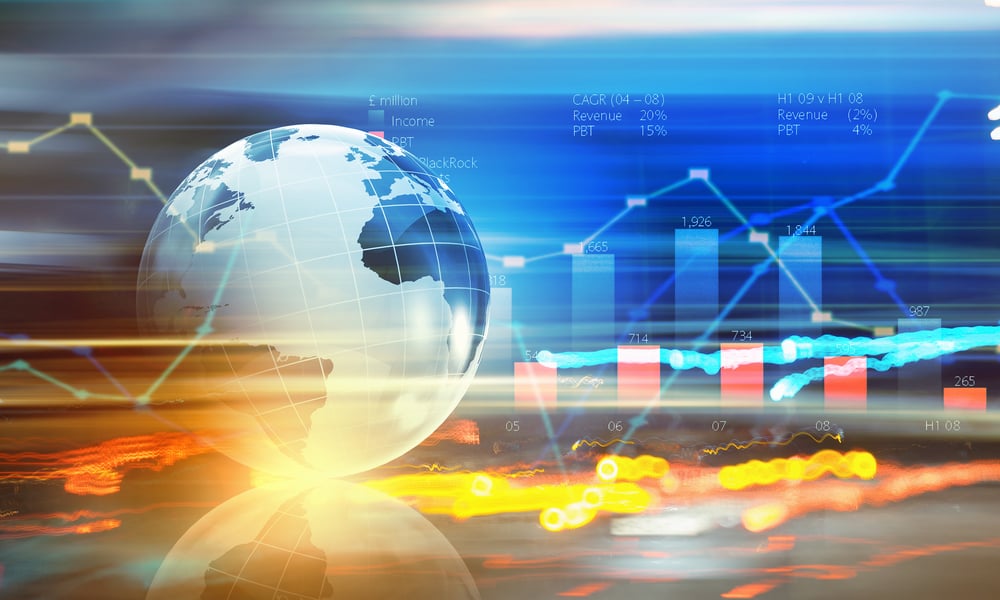 The economic shutdown due to the COVID-19 pandemic coincided almost perfectly with the Santa Clarita Valley Economic Development Corporation’s previously scheduled, and ultimately canceled, Economic Outlook Forecast on March 12. In the six months that have ensued, SCVEDC's economist, Dr. Mark Schniepp of California Economic Forecast has been keeping a close eye on the rapidly evolving economic impacts of the shutdown on a national, state and local level.  On September 17, 2020, Schniepp presented a revised Economic Outlook Forecast at our rescheduled virtual conference. Though an economic recovery is underway, he predicts it will proceed slowly for the rest of the year and that full recovery will be out of reach until a vaccine or cure for COVID-19 is widely available. 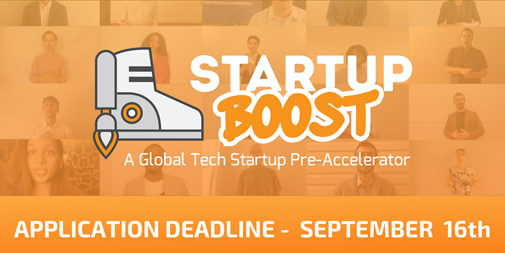 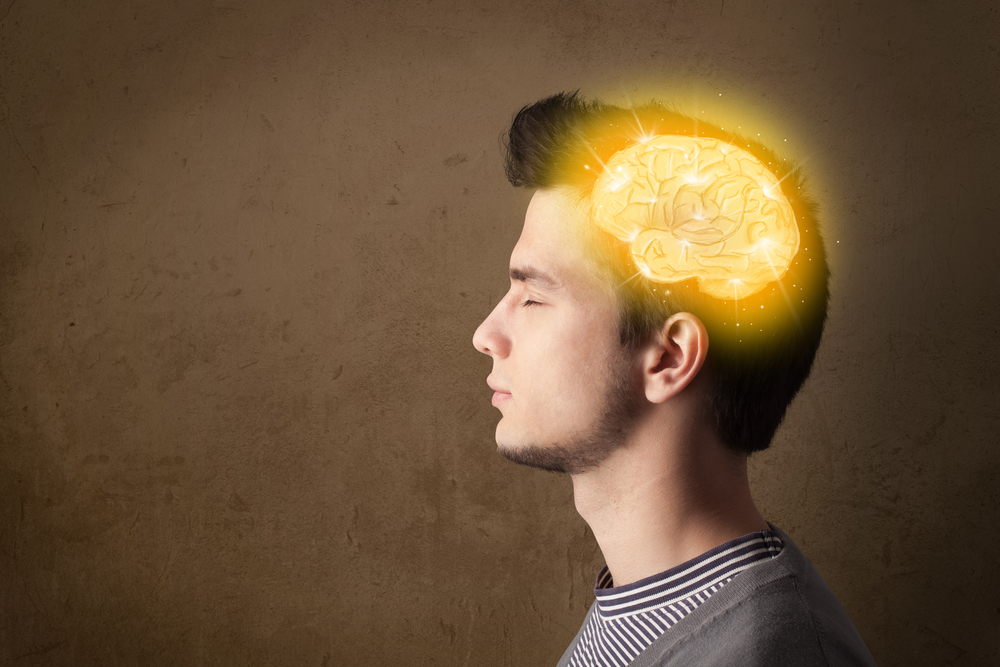 Five Reasons Why the Burbs are Better than Ever

Five Reasons Why the ‘Burbs are Better than Ever

Covid-19 has considerably altered daily life in the United States and around the Globe. These changes have upended the way we shop, how we educate our children, and how we work; this pandemic is also likely to affect where we live.

The Santa Clarita Valley is growing, and that's a good thing. According to Dr. Mark Schniepp of California Economic Forecast, new commercial and industrial development and construction will help spur the economic recovery in our region. 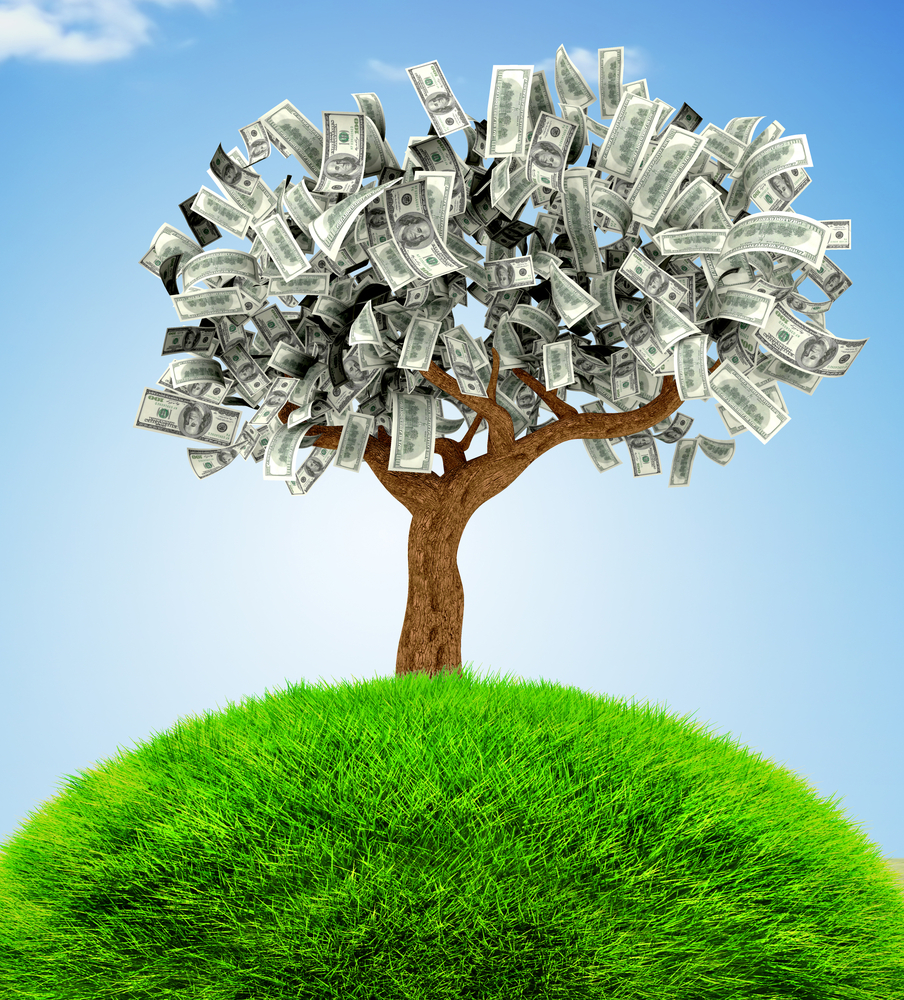 Have you heard about the California Competes Tax Credit (CCTC)? It’s a state income tax credit supporting growth of high quality jobs in California, available to businesses who want to come to, stay in, or grow in our state. Through a two-phase process, businesses apply and compete for this credit during three application periods each fiscal year.

Save the Date - SCV Economic Outlook Forecast Rescheduled for September 17, 2020 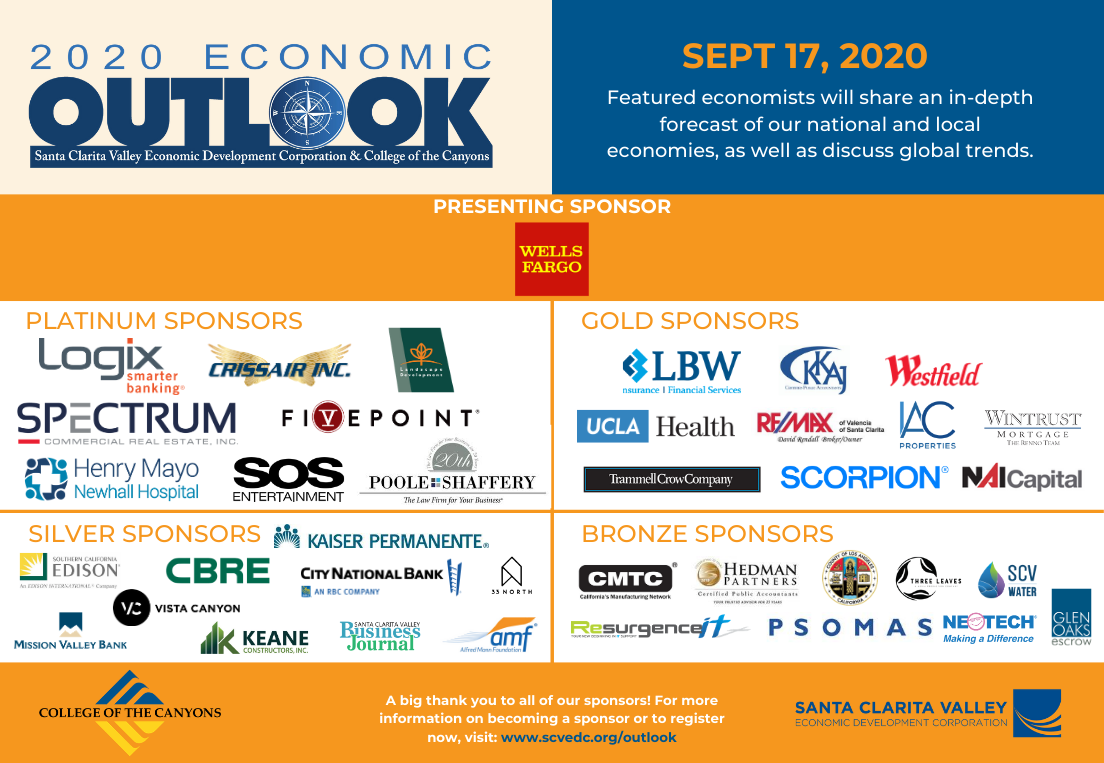 Save the Date - SCV Economic Outlook Forecast is Rescheduled for September 17, 2020

Are you wondering how the Covid-19 crisis has impacted the economy of the Santa Clarita Valley, the state of California, the United States, and the world? Does your company rely on accurate and up-to-date demographic data for the region? Are you interested in how growth and development will shape Santa Clarita in 2020 and beyond? If you answered yes! to any of these questions, you need to attend our Virtual 2020 Economic Outlook Conference. 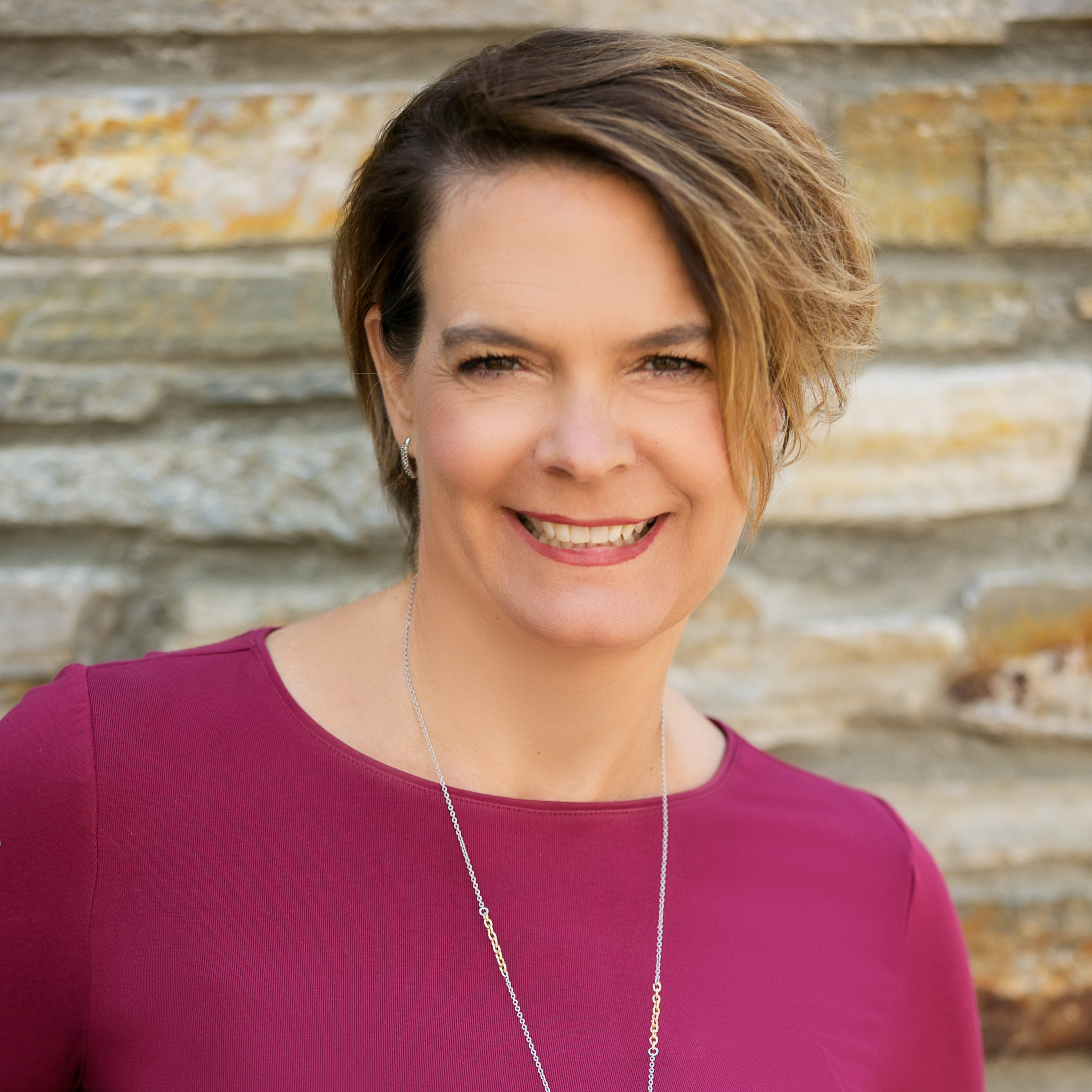 Several members of the Santa Clarita Valley Economic Development Corporation’s Board of Directors have been named to the San Fernando Valley Business Journal’s Valley 200 list announced on July 20. Holly Schroeder, President & CEO of SCVEDC has also been recognized as a Valley 200 Icon of Influence, along with SCV business owner Cheri Fleming, CEO of Acura of Valencia and SCVEDC Board Member Tamara Gurney, President of Mission Valley Bank.

Amazon has signed two leases for distribution centers in the Santa Clarita Valley; one in the Needham Ranch development in the City of Santa Clarita and the second at IAC Commerce Center in unincorporated Los Angeles County. 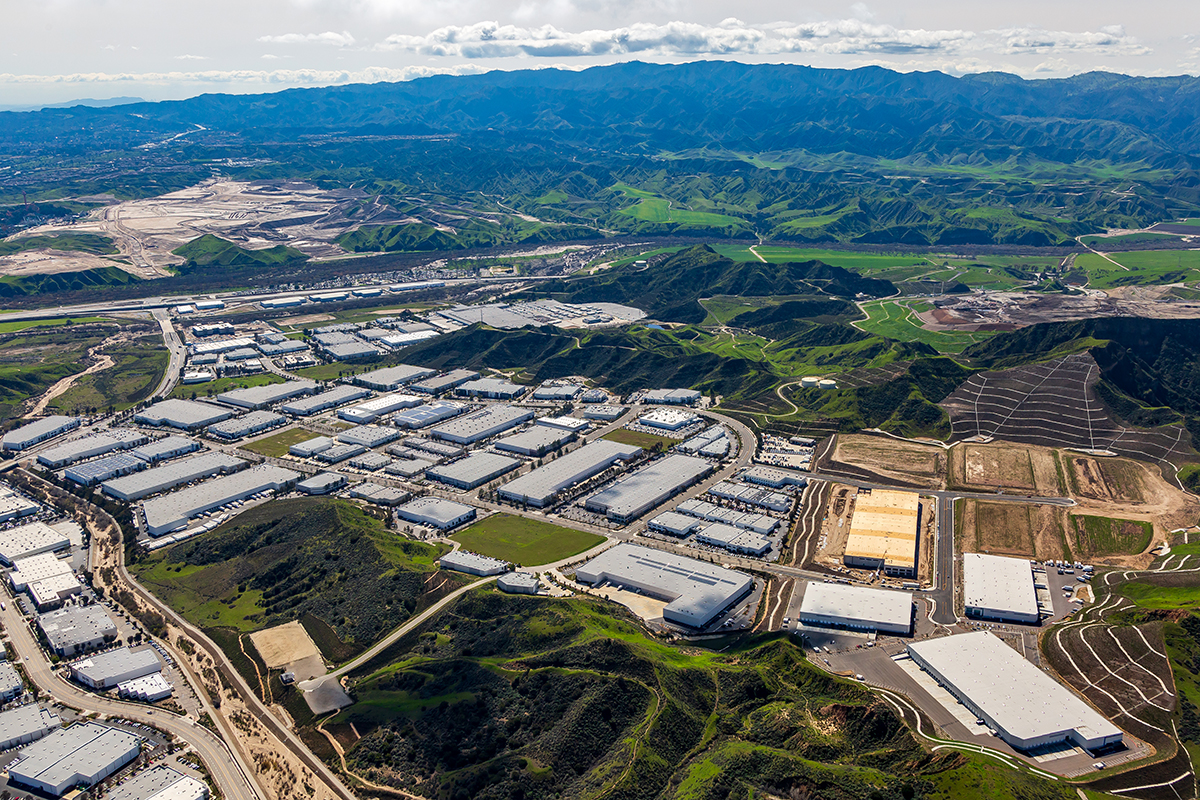 Newmark Knight Frank (“NKF”) announced it has negotiated a 155,680-square-foot industrial lease at 28820 Chase Place at IAC Commerce Center, which includes two adjacent lots totaling 23 acres, planned to be used as parking for the warehouse employees. 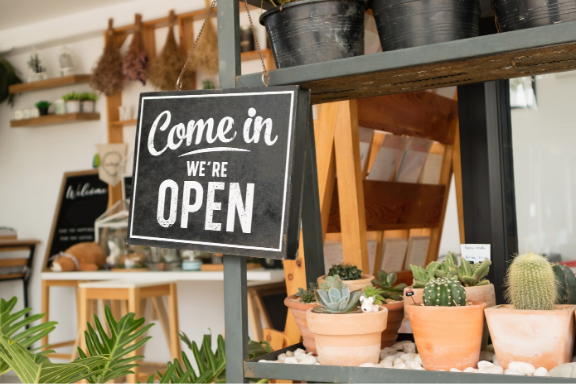 To underscore the importance of businesses demonstrating their responsibility and caring of both employees and patrons as they reopen, the City of Santa Clarita in partnership with the Santa Clarita Valley Economic Development Corporation, The Chamber and VIA, has launched the “Santa Clarita Safer Business Commitment” initiative. SCV businesses are invited to publicly commit to take action by pledging to follow safety guidelines and best practices, as issued by the Centers for Disease Control and Prevention (CDC) and Los Angeles County Department of Public Health to continue slowing the spread of COVID-19.

LiveWorkSCV - the FREE Job Board for SCV Residents & Employers 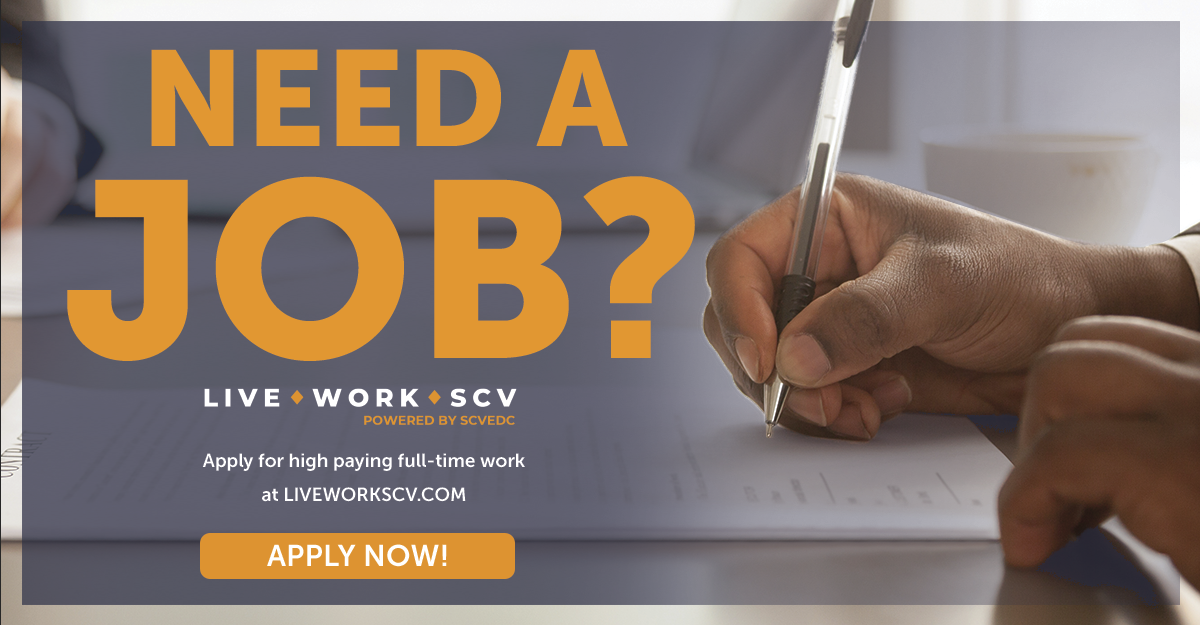 LiveWorkSCV.com - The FREE Job Board for SCV Residents & Employers

As the economy begins the reopening process, many SCV residents have found themselves either searching for a new job after being furloughed or laid off, or are seeking a career closer to home due to continuing uncertainty. SCVEDC is here to help. 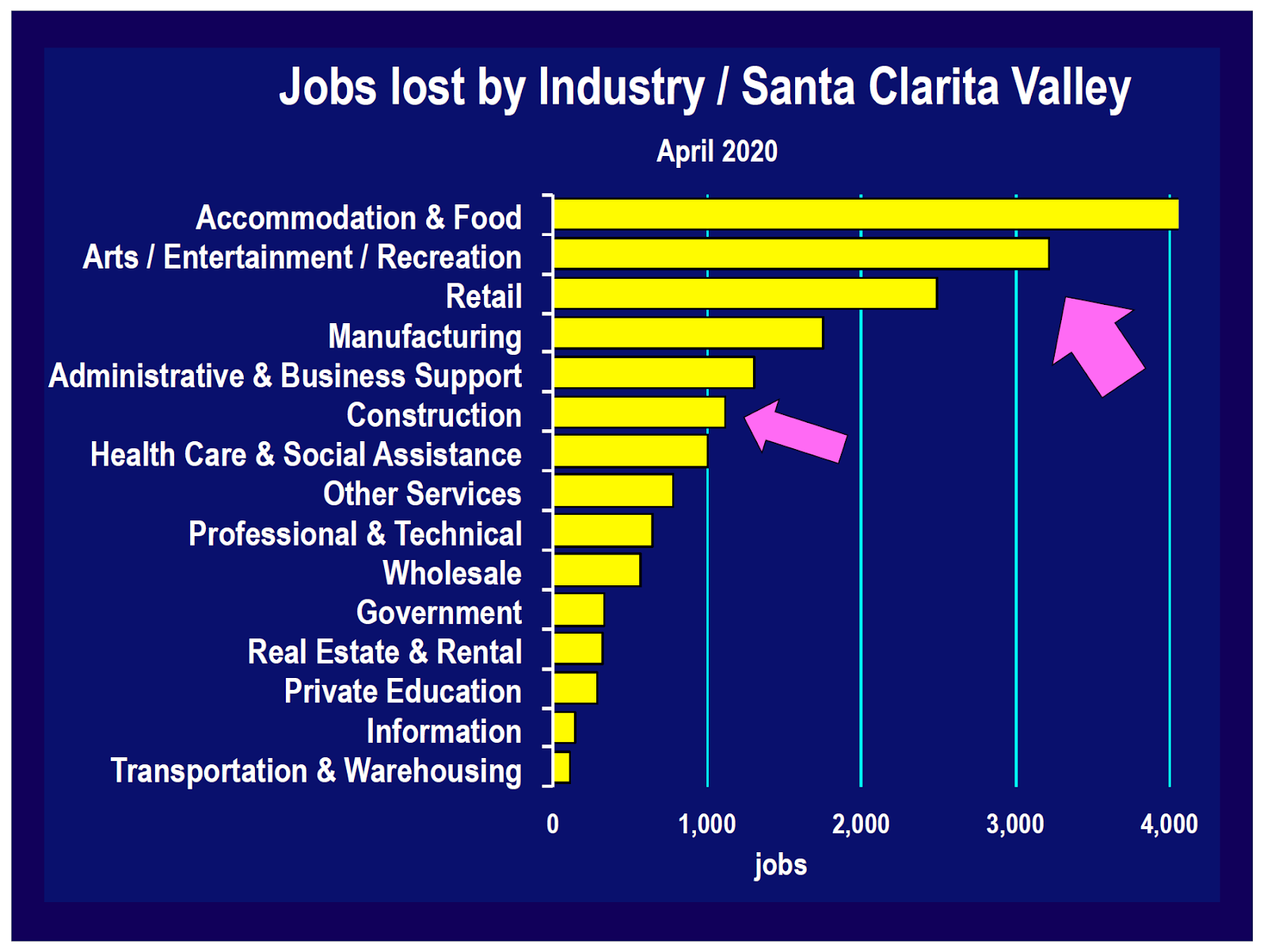 The Santa Clarita Valley Economic Development Corporation in partnership with the SCV Chamber of Commerce launched a webinar series in May to provide insights on many aspects that businesses need to consider as they plan strategies for rescaling and reopening. This Back2Business series, supported by a grant from Wells Fargo Foundation, uniquely engages SCV business and community leadership in sharing their experiences to date, outlook in the coming months, and practical guidance to both B2B and B2C businesses in the Santa Clarita Valley. Seven webinars were held in May. 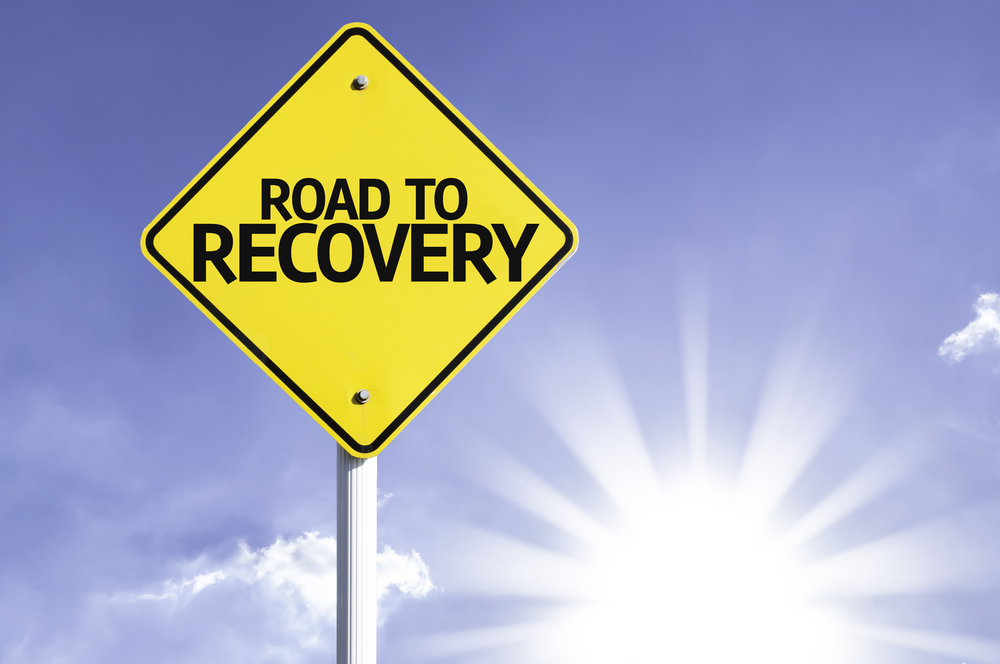 Holly Schroeder, President & CEO of the Santa Clarita Valley Economic Development Corporation has been invited by Supervisor Kathryn Barger to participate in the Business – Corporate / Manufacturing working group that will report to the County’s new Economic Resiliency Task Force. The Task Force met for the first time on Friday, May 8, 2020.

Economic Development - More Important than Ever 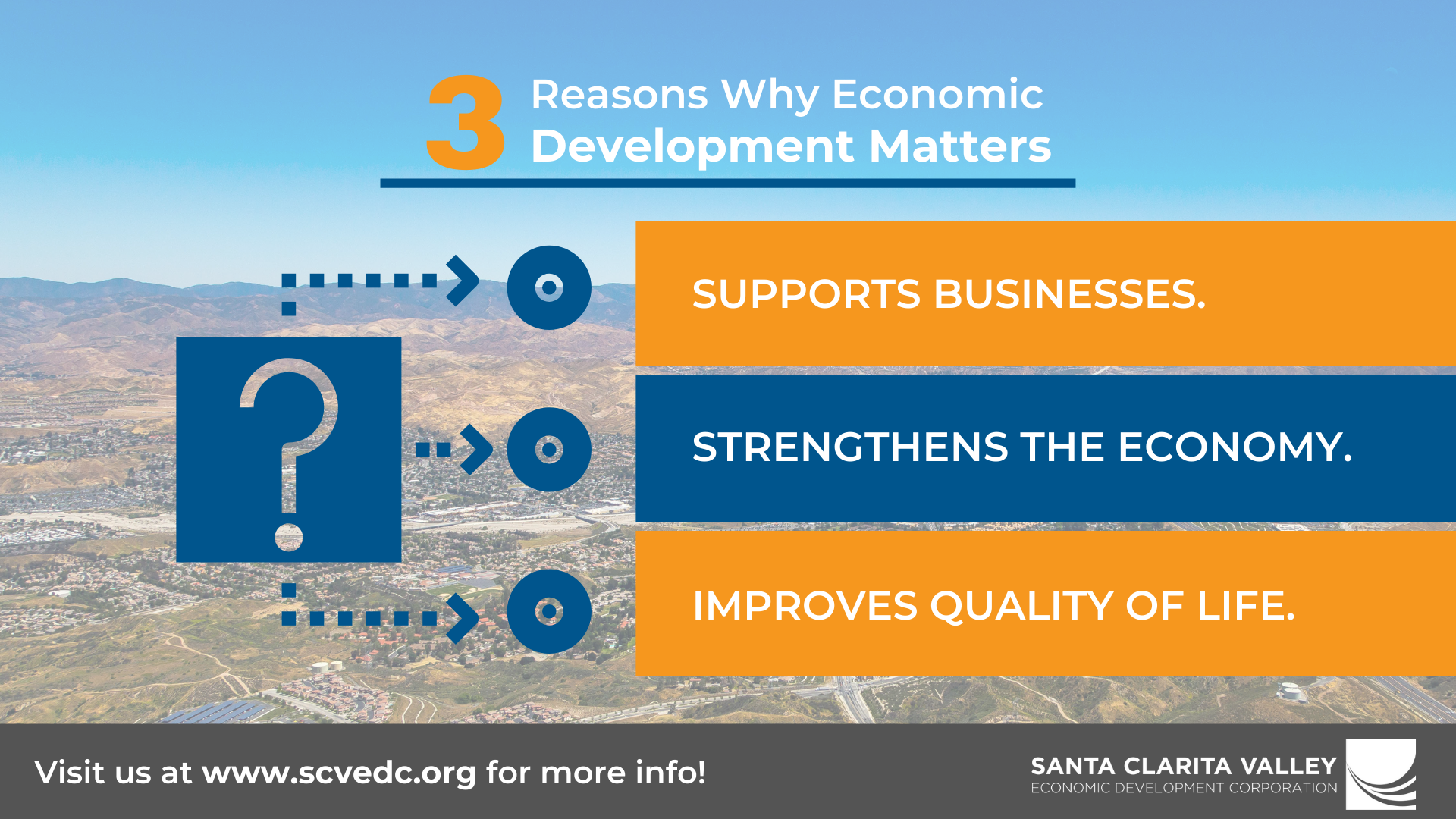 Economic Development - More Important than Ever

This is an op-ed originally published in the Signal by SCVEDC Co-Chairs Calvin Hedman and Roger Seaver.

This week is National Economic Development week and the timing couldn’t be more perfect. As we look ahead to reopening the economy, economic development is going to be more important than ever. 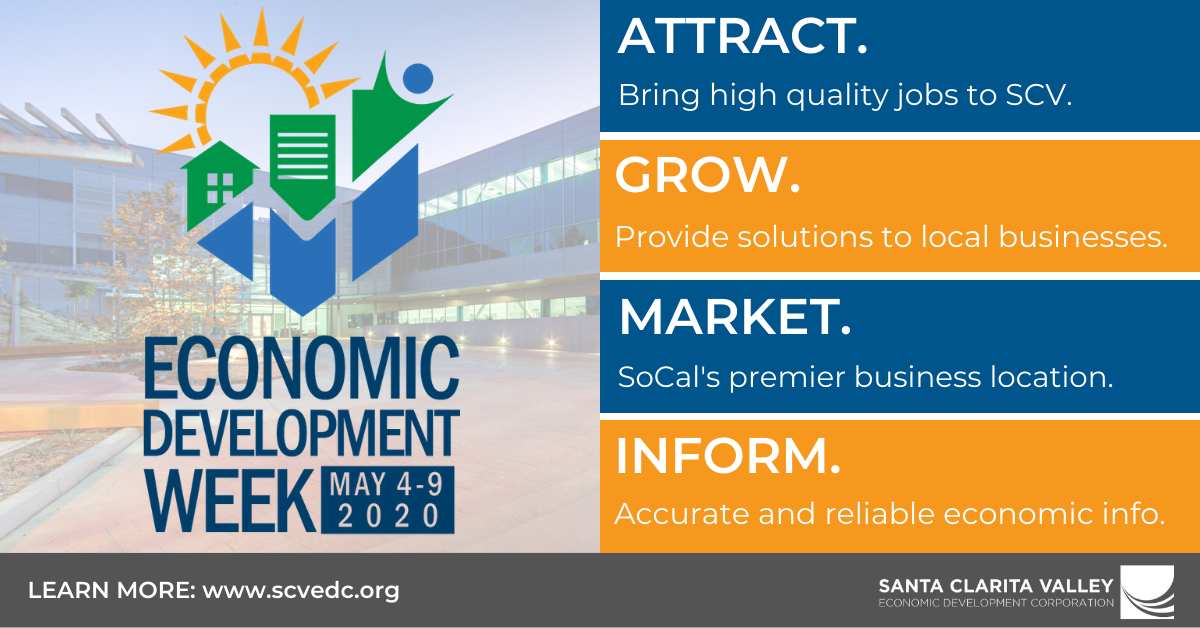 Scaling Up: Back2Business Webinar Series to Ensure Businesses Are Ready for a Post COVID-19 World

With the new $484 billion coronavirus stimulus bill signed by the President today, hope is renewed for SCV businesses to obtain COVID-19 financial relief. The new bill brings $310 billion to replenish the Paycheck Protection Program (PPP), with additional guarantees that a portion of the funds must be granted by smaller lenders that cater to truly small, local businesses. At least $60 billion must be granted for PPP by small banks, community financial institutions, and credit unions.

Despite the fact that so much is still unknown, employers are already beginning to consider how their workplaces will look and operate after “stay at home” orders are lifted. And while the future is impossible to predict, we can already see changes in how people do work, where they do work and how workplaces are configured that might give us some insight. 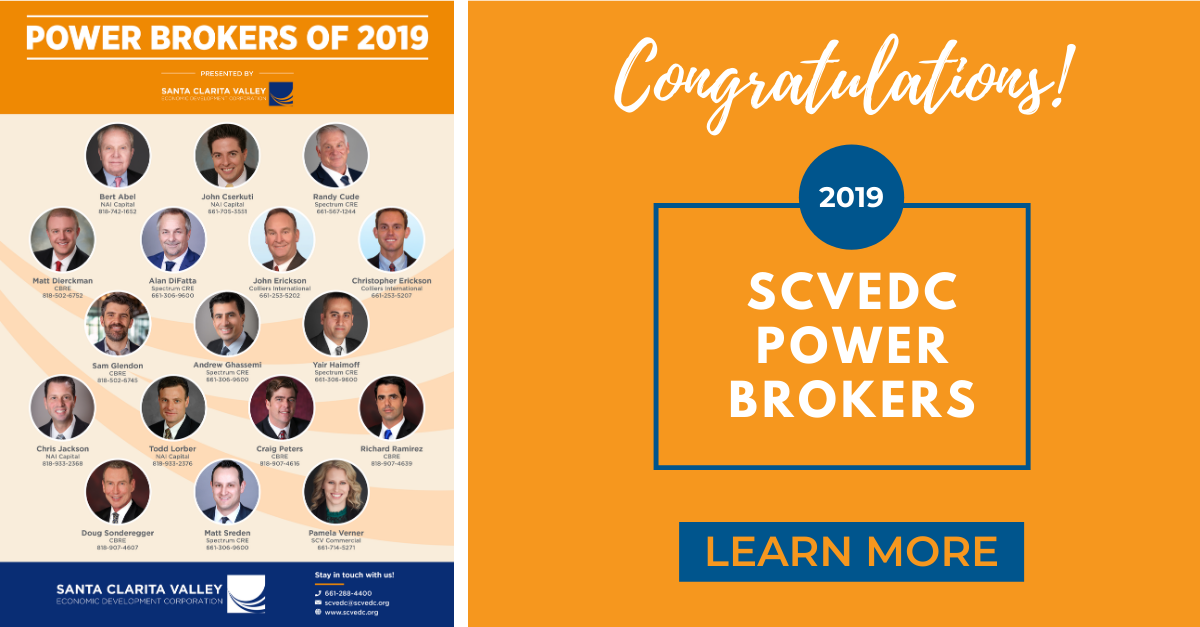 SCVEDC Honors the Power Brokers of 2019

Here at the Santa Clarita Valley Economic Development Corporation, we’re invested not just in growing our local businesses, but attracting great companies to the region with a focus on industries that provide our residents with high quality, high paying jobs.

The Santa Clarita Valley has had more than its fair share of challenges this year, and the current COVID-19 pandemic is certainly one of them. But despite it all, our tight-knit community has a reputation for stepping up and taking care of each other. From folks offering to run errands for elderly or sick neighbors to businesses finding creative solutions in the face of seemingly insurmountable obstacles, I am in awe of how our community responds to difficult situations.